After two nights in Madrid, we flew 13 hours on to South America the longest flight i’ve ever been on! We spent our first night in a hotel in Buenos Aires where the halls smelled really bad.

We stayed in a farm house with an 8-year old little girl. On our first day, we played tag, Marco Polo and red-rover. We also played Bingo and Dominoes. The next day we found our own Terribithia and picked out the moss. We, scratch that…, I fell in the pond. After I changed, we pet the horses and climbed the tree. Later that day, I heard Ximena scream, Angela, so I came out to see. Her dad picked up a lamp and brought it over for us to pet. When he let the poor thing go, we had a chance to catch them by their back legs. Ximena and I each caught four! Later that night for dinner, we went to a restaurant named La Pausa. there was a 3 month old kitten that we played with while the food was prepared!

On Sunday, Ximena left for the day and we went to another restaurant in town called the House of Chocolate. There was a little boy there who would duck out of site anytime he saw us looking at him. That night for dinner, i helped daddy cook on the wood grill behind our house. When we were almost done, I dropped the lever and almost broke my hand! Dinner was great though, it was a yummy day. When Ximena came home the next day, we all went for a horseback ride together. Ximena and I rode on the same horse, Ximena was in front. Her dad kept yelling to her to not let the girl fall off, Ximena yelled back, “Her name is Angela” and her dad replied, still don’t let her fall off! It was a great ride. Birds kept swooping down to make sure we didn’t go too close to their nests.

Our days in the farm house were fun – we’d eat, school, play, eat, play ,eat then one day, we went to bake cookies at La Pausa. We put in butter from a square of butter as big as a notebook page! We also put in all of the chocolate chips. While we waited for them to bake, we played with Simone, the kitten, some more. After we had the cookies, our new routine became, eat, school, play, eat, share cookies, play. Sadly, our time with Ximena came to an end way to quickly, and we packed up our things and drove away. We didn’t get too far though – after driving about a half hour, Emily told us she left her kindle in the bed. We turned around, drove back for the Kindle and said good-bye one more time.

Our next real stop was a working cattle ranch. When we got there, was one other big family there, but it was their last day. After they left, we were able to pick any room we wanted. We jumped on the trampoline and swung on the trapeze swing that was higher than daddy.

On our first full day at the ranch, I swung on the high sing before horse back ride. The horses didn’t have names, so i named mine Buttercup. Emily named hers Rosey, Mommy’s was Butterscotch, and daddy named his… Watercow. Ugh, what are we going to do with him?

After our ride, the gaucho invited us to watch while he gave the cows their vaccines. He rounded them up ,and then had them run through a small alley that would hold them in one place. One of the cows had a baby that was only three days old. The umbilical cord hole was still there, so he put this spray on it, antibiotics and bug spray on the mom. It was a cool day, and the gaucho is very handsome!

Each day on the ranch we rode through a different route around the property. On the second day, I fell so far behind, I could barely see the handsome gaucho. My horse really loved to eat.

After our lunch, the handsome gaucho took us to the Cascade falls, but it hadn’t rained in a while, so there was just enough water to swim in. I slipped getting into the water, so I didn’t need to worry about getting used to it. We then explored around on the rocks and I saw a huge lizard that ended up being an iguana.

On our third morning, we were on our ride and we came to a little stream. Buttercup, being the sassafrass that she is, didn’t want to get her feet wet, so she jumped over it! I jumped on her! I mean I didn’t try to, but it happened. Woop Woop me! Later that day we went kayaking in the lake and felt like big girls when we could kayak alone. I only got stuck in the lily pads a few times. As we were getting used to the water, things were getting on Emily’s feet so we got out and Emily started screaming “It’s alive” Then I started yelling that something was on my feet too! They turned out to be snails or tadpoles, I guess we aren’t such big girls after all.

On our last morning, we went on the ride while daddy packed up. Sadly it was time to leave again, but at least the next stop was the BEACH!

On our first full day at the beach, we did our schoolwork. Then, we had fun jumping waves, making ourselves mermaids, doing cartwheels, playing games and swimming. I was so happy to finally be by the ocean again.  The next day we drove to the next town over, Punta del Este and had lunch at a great restaurant, Punta Salina.  It was amazing. I ordered the filet, it was so tender, i ate all but a few bites (which mommy ate) For dessert, I had a chocolate volcano cake! We then went to a Fresh Market before going back to our place.

On the third day at the beach house, we again went to the beach in the afternoon. I really wanted daddy to take me out past the crashers, but he was worried the water was a little too rough for me. At first he said he’d take me the next day and I didn’t handle it very well. I pulled myself together though and we took a walk down the beach. Down where we walked, the waves weren’t as huge so he took me out! It was amazing!. We had to go under a few waves but it was still fun. We didn’t stay very long because he wanted to also give Emily a chance. Emily though went under one wave and came up from the water screaming like a monkey! When she got back to the beach, we buried ourselves in the sand to keep warm and daddy then took me out again to rinse off all the sand.

On Monday, the waves were again too big to go swimming, but we found a slew that was still in the ocean so we could play in the slew that had it’s own crashers. Muy Divertida! (Very fun) There was a sandbar just past the crashers, so in one moment, we’d be shoulder deep, and the next moment, by walking out in the direction of the ocean, we’d only be knee deep, and we’d know it was time to turn around before we got too far out to sea. The next day, the ocean was a little calmer and mommy let me go out past the crashers on my own! I only had to go under the wave once, but it was kind of scary since no one was holding my hand. I got this kinda empty feeling like the ocean was going to pull me out to the big fish filled sea. all in all though, it was muy divertida! Now, I am a big girl again, and this time i didn’t ruin it! On our last day at the beach house, we had another family day at the beach. When daddy took Emily back to the house, mommy and I went back to the beach with some beverages and drew each others faces in the sand. It was a great family day.

After only a half hour drive, we made it to the Grand Hotel Punte del Este. After checking in, we checked out the kids club. Emily and i played air hockey and Emily kept cheating by flinging her pusher thing across the board to hit the thing i couldn’t reach, or to hurt my hand so I couldn’t block her hits. I still won though. Cheaters never win and winner snever cheat. We ate lunch at the hotels beach restaurant and I had the “Grand Burger” – the burger, egg, bacon, onions, lettuce, tomato and ketchup, smashed between two delicious  buns. After lunch, we went to the pool and made a new friend, and played some fun new games in the pool together.

The next day, we went to the kids club again, and started with a few games of air hockey. Emily didn’t cheat this time because the teacher got on to her last time. Then we played catch with a big blue rubber ball that was almost as big as Emily, and went to get our hair cut in the hotel’s salon. That afternoon, we went to the beach and played in the waves. It started getting a little rough, and I had to go under quite a few. One time mommy whistled right as a huge wave came in. It pushed me under, forced me into a couple of flips, and bashed my knee on the ground hard. But as usual, I came up gasping for breath, but ready to go again! Silly me. Next, Emily was a little cold, so we swam in the pool for a few minutes before getting ready for our movie in the Hotel’s cinema.

We repacked our things that night, excited that after our next flight, we’d get to see Ma! 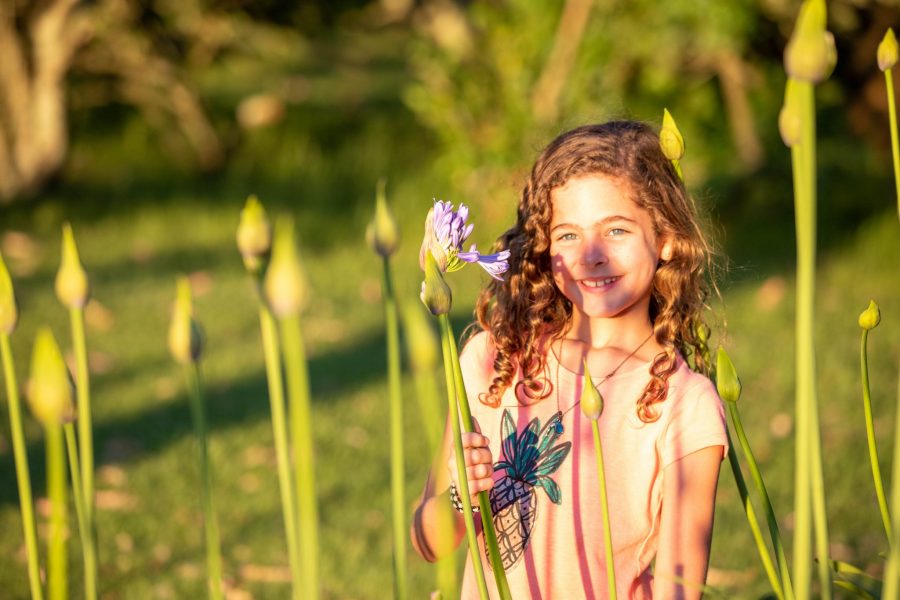