We flew 13 hours to Buenos Aires and spent one night in a hotel before going on to Uruguay. The pipes in the hotel smelled very bad. We ate dinner at a really good steak house – trust me best steakhouse ever.

The next day, we flew to Uruguay, and drove to our house. We met a girl named Ximena and taught her how to play Red rover, Marco Polo, and tag. We also played dominoes and bingo.

For the next few days, we played outside all day with Ximena. We found a secret hide out where we tried to make ink from the dead moss. We also cleared a lot of moss off the rocks. Angela’s butt fell in the water of the creek. We rode horses with her – Angela rode the kid with Ximena and I rode the mom with mommy.

For dinner, we went to a place with the cutest cat ever. Her name is Simone, and she is still a kitten. The food was really good and the kitten was really cute. The owner, Grace, invited us back to make cookies with her a couple days later. We loved the restaurant and playing with Simone. The chocolate chip cookies were great too of course.

One day we ate lunch at a restaurant named, “The Little House of Chocolate” and there was a  funny boy there who kept spying on us. It was too bad we lost dessert there, the place was famous for it’s dessert. That night Angela helped daddy cook on the outdoor grill and almost broke her hand. It was a cool day.

We cooked Thanksgiving together on the outdoor grill. The pets, Canpanion, Molly, Laka, Hasme all  tried to help. Our Thanksgiving was awesome and so was dessert!

We were sad to say goodbye to Ximnea, even sadder when we checked into our hotel on the way to the ranch. The hotel we stopped at for one night was discsting [disgusting]. It was a outhouse – you hear me? We did like swimming in the pool and had pretty good drinks and food, but I’d much rather be in a manchun [mansion].

On Sunday, we went to a working ranch that was the fancyest hotel in the world compared to the outhouse (the horrid motel). There were dogs , cats,  and  everything you could ever imagine made with dulce de leche.

I rode the same horse there every day. Her name is Rosey. She is so soft and sweet, and I admit, I loved her. We each named our horses, Mommy’s horse was Butterscotch, Angela’s horse was Buttercup, and when daddy saw a cow in the water, he named his Watercow. On our first day at the ranch, after riding we watched the gaucho give the cows their shots. One of the cows jumped over the fence when he didn’t’ want his. There was a baby cow only 2 days old, Edwardo, the guacho took extra care of it, washing its stomach.

The next day Rosey was tired on our ride. You want to hear a funny story? Well, Buttercup ate some, she pooped some out. Next we went to cafe cave falls. It was a tiny water fall that we got to swim in. We went hiking around and daddy saw an armadillo. After swimming, we jumped from rock to rock. It was an awesome exploration day.

On our last full day at the ranch, we went to the lake after our morning ride. I’m a big girl finally! we got to kayak alone! I only got stuck in the lily pads once. I also kinda swam. We got out, there were tiny snails on our feet and I yelled “it’s alive”

After the ranch we went to the BEACH! Our first day, we played on a rock and then tag – it was pretty fun. The next day we spent most of the afternoon at the beach. That night we ate at a restaurant that wasnt very good.

On Saturday, we drove to another town for groceries and had a great lunch, and even better dessert. I had a Dulce de leche volcano! Sunday, we spent the entire day at the beach. We jumped the waves and swam under them to get out past the crashers. The first time I came up from a wave I screamed. When we got back to shore, I dug a pretty warm bath and with that, sat in it.

Each day we got better in the waves. Some days we all went out as a family together – jump, jump, jump.. oh no big wave – under, jump, jump jump, jump, aaaahhh, under. It was so fun and chilly, so we had to go ashore.

On Friday, we went to the Grand Hotel. Oh, it was such a nice place. When we first got there, i thought, I’ll love it here! The first thing we did once we were checked in was lunch. We had a killer burger. And when i say killer, I mean I would die for it. Then we met Maria and Montina in the kids room. Ot was actually pretty fun. We started with apuzzle, then played air hockey till I couldn’t take being beaten anymore. That was when it was time to leave. We changed and went to the pool and made a new friend, Montina. After swimming, we got showered up and went to see if the move in the cinima was in English. It wasn’t so we arranged one at five the next day. The options were Bigfoot or Despicable Me 3, we chose despicable me.

On Saturday, we went to meet Montina again, but she didn’t come. We played a bit in the kids club, and then got our hair cut. She did a really good job. We swam in the ocean, swam in the pool, and ate some great meals and watched our private movie – it was a great last day in Uruguay and we are so excited to travel on to meet up with Ma again! 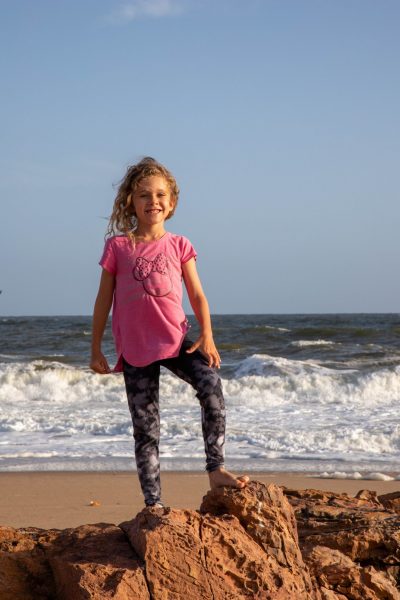